Deanie’s Tells the Tail of Four Types of Gulf Shrimp

Unlike other seafood, not all shrimp are created equal. There are almost as many different species of shrimp in the Gulf of Mexico as there are ways to cook shrimp. You can find brown, white, and pink shrimp in Louisiana waters for grilling, boiling, or frying and seabob shrimp, which is especially good for marinating. These species of shrimp —collectively known as “Gulf Shrimp’”—come almost exclusively from the Gulf of Mexico with 97 percent of domestic shrimp harvested in the United States coming from the Gulf.

Shrimp, namely white, brown, and seabob, have been harvested commercially in Louisiana since the 1800s and continue to be the foundation as the second largest commercial fishery in the state. Louisiana is the top harvester of shrimp in the Gulf of Mexico and has led the United States in shrimp landings every year since 2000.

Still, competition from foreign shrimp and crawfish has devastated the Louisiana seafood industry, which has also faced a number of natural and manmade disasters impacting landings. Thirty years ago, Louisiana had 36,000 shrimpers. Today, it has about a sixth of that total. 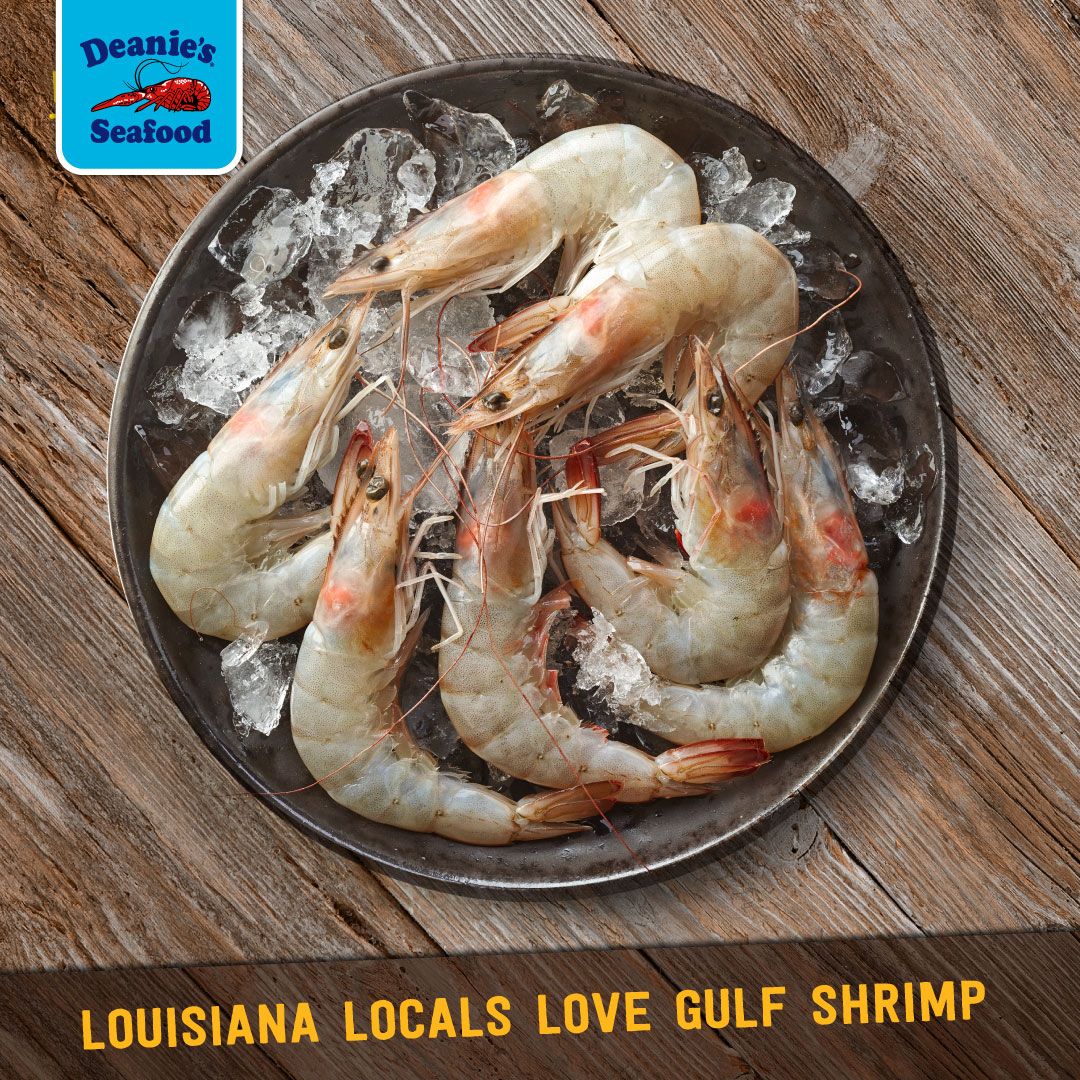 Deanie’s Seafood serves only certified “Wild Louisiana” shrimp at its three restaurants and seafood market, so you know you’re supporting one of Louisiana’s most important seafood industries. Louisiana’s shrimp industry is so important the state passed legislation requiring restaurants to label imported shrimp and crawfish so consumers know the country of origin as fishermen compete against cheaper, imported products, which are less regulated than domestic seafood.

Shrimp is among the most popular seafood in the United States. Americans eat an average 4.1 lbs. of shrimp a year. Once cooked, Gulf Shrimp appear to be almost identical but their taste can be quite different. Each of the three species brings a different flavor and texture to any dish they are being used in.

Brown shrimp can be found in the deeper waters of the Gulf of Mexico mostly during spring and summer in areas with soft mud and sand. Also known as Red Shrimp or Summer Shrimp, this species has a firm texture and a slightly salty but strong natural flavor courtesy of their iodine-rich diet. This robust flavor makes them perfect for flavorful dishes like seafood gumbo and jambalaya. Brown shrimp is also what you would find in a traditional shrimp Poboy.

The first species of commercially important shrimp in the United States, white shrimp is valued for their easy-to-peel shells and the sweet, tender meat contained within. The more mild flavor comes from the shallow areas in which white shrimp can be found such as brackish estuaries and bayous.

White shrimp are most abundant during summer and fall. Their mild flavor allows them to soak in the flavors of any sauce they are cooked with, making them great for any recipe using boiled or sautéed shrimp, including New Orleans Barbeque Shrimp, Gulf shrimp prepared in a savory blend of garlic, lemon, butter and herbs and spices.

Pink shrimp are the largest Gulf shrimp species in size and share the same sweetness as the white shrimp have. With an even more reserved flavor profile, pink shrimp are the best choice of shrimp for dishes featuring delicate sauces like shrimp and grits and New Orleans Barbeque Shrimp. Due to their size, pink shrimp go for slightly higher prices than brown and white shrimp but are more abundant during the winter months.

The seabob is a small white shrimp that inhabits the shrimp fisheries in the Gulf off of Cameron Parish. Seabob account for about 1% of the catch in Louisiana, the bulk of the seabob harvest taking place during the fall and early winter months (October through December). Shrimpers trawl for seabob in muddy water near the shore, dragging their nets through dense schools close to the soft mud bottom. Seabob have a delicate texture that makes them particularly suitable for marinating or in combination with sauces because they absorb flavors very well.

With its sweet, mild flavor and firm texture, shrimp is a versatile seafood that can be prepared in a wide variety of ways, and knowing the flavor profile of the different shrimp species can help bring out the best flavors in each meal. 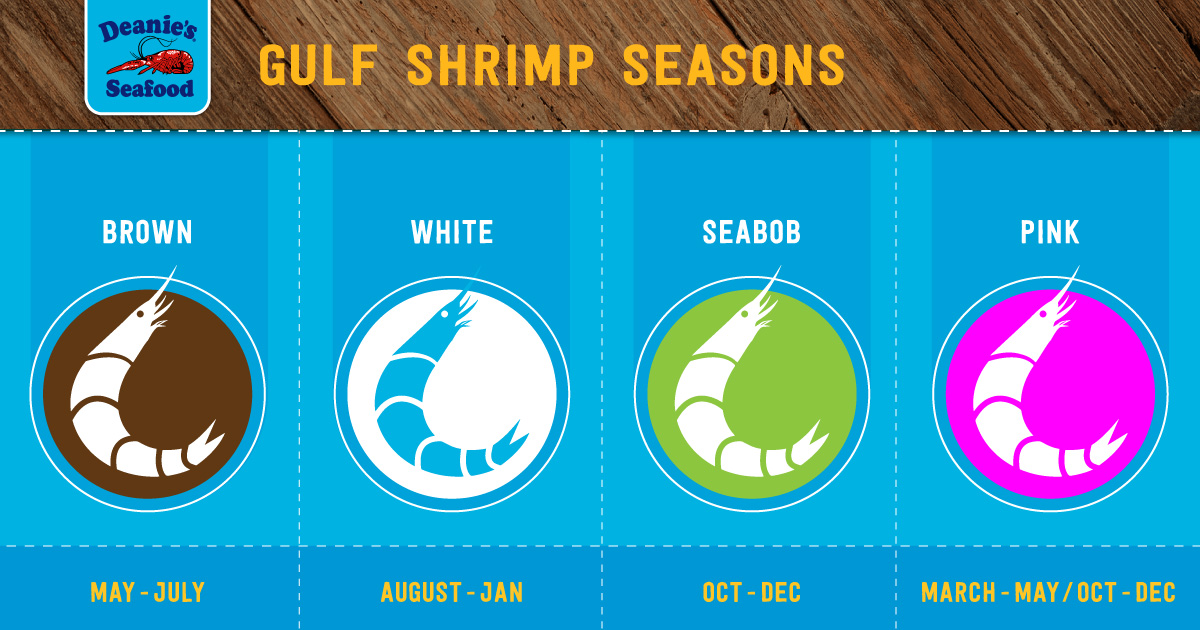 A powerhouse in local seafood and “scratch house,” every dish we serve is prepared fresh and made in house using family recipes and the freshest daily catch at our three New Orleans seafood restaurants and seafood market.

Visit {{cta(‘d13ffdd8-690c-493a-8141-d82f8676f5c3’)}} to try some of the freshest Gulf shrimp available no matter where you live in the United States! We ship Louisiana oysters, blue crab, shrimp and live and boiled crawfish and a variety of prepared items to homes across the country right from our neighborhood seafood market.