Louisiana Crawfish Aquaculture is largest by far in US

Rice paddys and crawfish farms go together like rice and étouffée

Agriculture is the practice of breeding, rearing, and harvesting fish, shellfish, plants, algae and other organisms in all types of water environments. On the East Coast, paddy fields and mangrove fields are converted into shrimp farms, while the West Coast, which protects mangrove fields, is more likely to convert idle plantations or paddy fields into shrimp producing fields.

The rice industry traveled south from the Carolinas to Louisiana with Acadian settlers. In Louisiana, rice paddys (an irrigated crop) are often converted to crawfish farms. (Photo by New York Times) 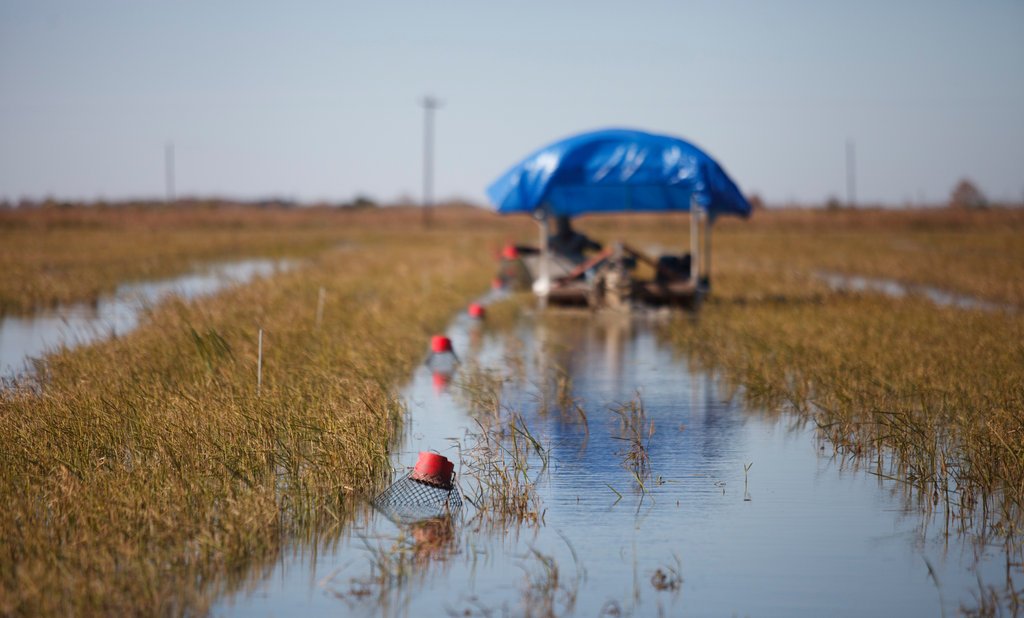 Louisiana rice was originally grown for home consumption by utilizing areas that couldn’t be plowed. Rice has long been an essential ingredient for hardy Cajun victuals, such as gumbo, jambalaya, crawfish étouffée, boudin and all kinds of gravies. Louisiana is the third-highest producer of rice and the greatest exporter of crawfish in the United States.

Louisiana dominates the crawfish industry of North America in both aquaculture and wild capture fisheries. Land area in Louisiana devoted to crawfish aquaculture, including permanent ponds and in rotation with rice crop, has grown from 120,654 acres in 1990 to 225,789 acres today, according to the LSU Ag Center. That’s compared to just 7,500 total acres in production in the rest of the United States.

Commercial rice production began in earnest in the second half of the 19th century, helped along by the railroad, which transported the crop to New Orleans. Rice is a prime cash crop for farmers across the Cajun prairies west of Lafayette, stretching all the way to the Sabine River that divides Louisiana from Texas. Each year, 18 billion pounds of rice are commercially produced, primarily in Arkansas (40%), Texas, Louisiana, Mississippi, Missouri, and California. Louisiana’s 400,000 acres of rice produce an annual crop of approximately $360 million, making the state the third-largest rice producer in the country.