Why Seafood is Good for You

There are many reasons why seafood is good for you. Fish is a healthy lean protein option with very little saturated fat. Seafood is generally low in cholesterol and rich in vitamins and minerals including iodine, zinc, potassium, and vitamin B. There’s also this little-known fact: Fish is an appetite suppresant. Researchers have shown that eating fish stopped people feeling hungry sooner than other protein foods such as beef and chicken.

Current dietary guidelines encourage Americans to increase their seafood intake to twice per week, or at least eight ounces of a variety of seafood each week. With so many varieties of fish, mollusks and shellfish, seafood also is the most versatile protein available, and cooking with healthy seafood recipes has never been easier. Read on to learn why seafood is good for you.

FISH IS A HIGH QUALITY PROTEIN 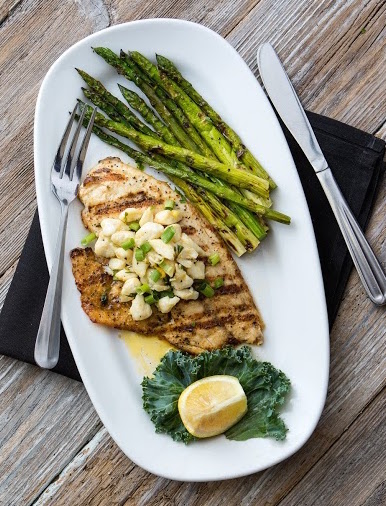 Most Americans don’t get enough protein in their diet. While the standard recommendation had been between 40 and 50 grams of protein a day, doctors now are recommending women have at least 80-100 grams of protein daily, and men consume 100-120 grams daily. Protein helps build muscle, boost your metabolism and also helps attention, cognitive function and mood.

Seafood has all of the essential minerals and amino acids, making it a complete protein source. Just a 3-oz. serving of seafood accounts for one third of the average recommended amount of protein. Also due to the fact that there is less connective tissue in seafood than in meats and poultry, seafood is a lot easier to digest than other sources of protein.

SEAFOOD IS RICH IN OMEGA 3s

Most health-conscious people try to avoid eating types of food with a lot of fat in it. Food that has too much fat content is usually considered to be unhealthy, and for good reason. Most dietary recommendations suggest that we cut down on the amount of fat we have in our diets, especially saturated fat. However, not all kinds of fat are unhealthy.

Omega 3 is an unsaturated fat that plays a role in lowering cholesterol, reducing inflammation and preventing heart disease, the leading cause of death in most Western countries, and other diseases. Omega 3 is considered to be found almost exclusively in seafood. Not only is most of the fat found in seafood unsaturated, you can also find a larger than average amount of Omega 3 fats in seafood as well. Look for seafood such as halibut, mackerel, trout, oysters and salmon.

While seafood is not as rich in vitamins as some other food categories, to say seafood lacks good sources of vitamins is not true. Most fish have just as many B vitamins as many other protein-rich foods, and fattier fish like mackerel are a good source of both vitamin D and vitamin A. Shellfish are a good place to get minerals such as zinc, iron, magnesium and copper; and most fish have a small to moderate amount of these minerals as well.

With seafood’s versatility, there are literally thousands of ways to prepare seafood at home. Most fish can be lightly coated with olive oil and grilled or prepared with a squeeze of lime, some herbs and butter. To stay on the lean side, avoid cream sauces (or substitute with half plain yogurt for your recipe) and use broth or a little diced tomato and onions or vegetables like spinach, mushrooms and broccoli. The interet has a plethora of simple healthy seafood recipes!

Boiled seafood such as shrimp, crab, clams or crawfish is another low-fat protein option—all you need is some seasoning and lemon and a pot of water. One of our healthy favorites is our Bayou Seafood Salad, a mixed green salad with artichokes, tomatoes, cucumbers and cheese topped with boiled shrimp and lump crab meat.

And so long as you’re being mindful of your health, your best bet is always to stick with domestic seafood over imported. That way you’re sure you’re getting a fresh product and you don’t have to be worried about antibiotics or other contaminants that can often slip through with imported seafood.