Sandwiched between the Fourth of July and Labor Day is one of our favorite mouth-watering holidays, National Catfish Month, celebrated each year through the month of August.

New York Times food critic and Mississippi native Craig Claiborne once said, “I am persuaded that catfish is the most Southern of all fish.” A staple in Southern kitchens, catfish became popular in restaurants across the country after the introduction of catfish aquaculture. Farm raised domestic catfish has been one the top 10 most frequently consumed seafood products in the U.S. for almost 20 years. Consumption levels over the past decade have been around 1 pound per person each year, up from 0.25 pounds in 1987.

Catfish are bottom feeders but farm raised catfish are fed scientifically-formulated high-protein pellets that float on top of the water. A flaky whitefish, catfish has a mild (not fishy) flavor and is a versatile protein that can be substituted for most recipes calling for cod, haddock or tilapia.

Arkansas was the first state to commercially produce farm raised catfish in 1963. Seven years later catfish production expanded into the rest of the Mississippi delta, and Mississippi has led the industry ever since, producing 55 percent of all U.S. catfish.

Deanie’s Seafood Restaurants have served Simmons Farm Raised Catfish since shortly after the farm’s soy and cottonfields near Yazoo City in the Mississippi delta were converted to catfish ponds in the late 70s.

The catfish is processed on site at Simmons Farm Raised Catfish Processing Plant, which opened in 1982, just around the time the Chifici Family took over Deanie’s Seafood Restaurant & Seafood Market in Bucktown. Today, Simmons Farm Raised Catfish is home to 1,500 acres of ponds, and a processing plant producing 80,000 to 90,000 pounds of catfish a day.

How to Choose and Cook Catfish

As Mark Twain once said, “The catfish is plenty good enough fish for anyone.” According to the Live Strong Foundation, a 3-ounce serving of plain, cooked catfish contains 122 calories, 55 of which are contributed by fat. Low in cholesterol, catfish is an excellent source of protein and heart-healthy Omega 3 fatty acids and contains 100% of the daily requirement of vitamin B12.

Frying is a tradition 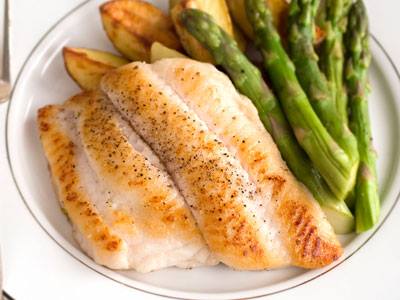 al preparation method for catfish fillets. However, to keep your total fat, saturated fat and cholesterol intake as low as possible, you can grill, broil or bake your catfish instead. You can prepare Blackened Catfish by blending salt, pepper, cayenne, lemon pepper and garlic powder and coating the fillets before frying in a hot skillet. You can also try out this recipe for Mrs. Sybil’s Catfish Baked with Cheese and try out other recipes from The Catfish Institute.

For firmer catfish that isn’t meant to fry, you can purchase Delacata, known as The Filet Mignon of Catfish, a hand-trimmed center cut catfish fillet with all the fat removed that is similar to redfish, grouper or halibut. Simmons Catfish Farm is one of a handful of processors offering this premium catfish online.

Make sure you buy only U.S. farm raised catfish —catfish that is produced under safe, environmentally sound and sustainable conditions; catfish that is inspected and held to the highest standards; and catfish that will taste great every time.

Where to Get the Perfect Catfish

Of course if you don’t feel like cooking, come to Deanie’s Seafood Restaurants, where we take great pride in serving the best seafood! Stop in anytime for a Catfish PoBoy, fried Catfish or Baked Catfish, which you can order topped with lump crabmeat, crawfish tails or shrimp.