We’ll share the best ways to eat and prepare both hard shell and soft shell crabs.

During the summer months, crabs begin to molt and shed their outer shell. Their exterior becomes very soft as the new shell takes time to harden. Crabs spend most of this time hiding under rocks and buried in the sand until their shell has hardened again. This marks the beginning of soft shell crab season, which ends around September as this molting process comes to an end for the year. 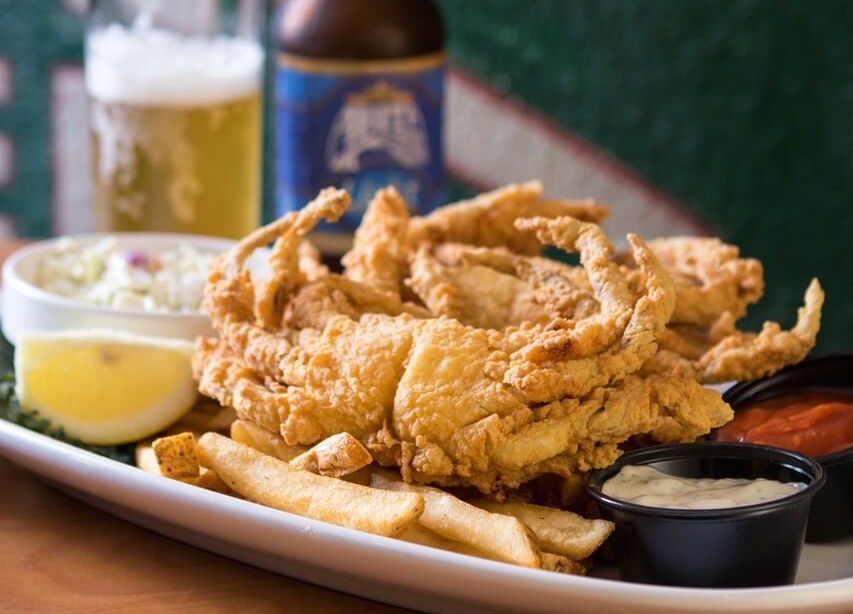 Preparing these soft shelled crustaceans for a meal is very simple. Soft shell crabs keep all of the flavor from blue crabs without the trouble of digging through the hard shelled exterior. It takes less than a minute to remove the few inedible parts allowing the entire crab to be eaten. Just like hard shell crabs, soft shells can be cooked in many different ways including fried, grilled, and sautéed.

Hard shell blue crabs make up for being more stubborn in giving up their tender meat by being available year round. The tough outer shell makes it more difficult to get to the meat that resides in the claws as well as the segmented carapace. Most of the meat in the crab is segmented into many small slots within the brittle shell, making it frustrating to remove the meat.

Both the crabmeat removed from the carapace, called ‘lump’ crabmeat, and the claw meat are what most people are familiar with when eating crab. The most common, and most fun, way to eat hard shell crab is to break through the hard boiled exterior with a mallet and pull out the meat yourself. Crab cakes, fried crab claws and crabmeat au gratin are just a few of the other common crab dishes that come from hard shell crab.

If you are out of town, you can order fresh or boiled Louisiana Blue Crab shipped direct to you through our seafood market at Shopdeanies.com, and also get a taste of our delicious crabmeat in prepared items like stuffed crab, stuffed shrimp and Deanie’s Seafood & Okra Gumbo.

Deanie’s is recognized as one of the best seafood restaurants in New Orleans (Gambit, Where Y’at, New Orleans Magazine, Gayot’s) and a great place to start for soft shell crabs. Deanie’s serves their famous Giant Seafood Platter, which features soft shell crab alongside shrimp, oysters, crawfish and catfish.