Expert Tips: How to Throw a Crawfish Boil

In case you are thinking about having a spring crawfish boil, like we do here in New Orleans, we thought we’d ask the experts at Deanie’s Seafood Market for tips to be sure your boil is a success.

Read on to find out how the locals do it.

The Lenten season and the month of April are prime crawfish season. In fact, Vatican II, which relaxed the Catholic Church’s edict to abolish mandatory abstinence from meat except for Fridays during Lent, coincided with the spread of the popularity of eating crawfish and the beginning of a large commercial crawfish industry in Louisiana. Today, many in the Bayou State celebrate Easter Sunday with a crawfish boil.

Straight from the Boiler Room: How to Throw a Crawfish Boil

Graff, a commercial fisherman for the past 27 years, comes from a family of fishermen—his grandfather, father and uncle all worked as fishermen in Bucktown, and, growing up, his family owned a seafood market of their own. There are even photographs of Graff as a boy catching catfish with a net from Lake Pontchartrain inside Deanie’s Seafood Restaurant. 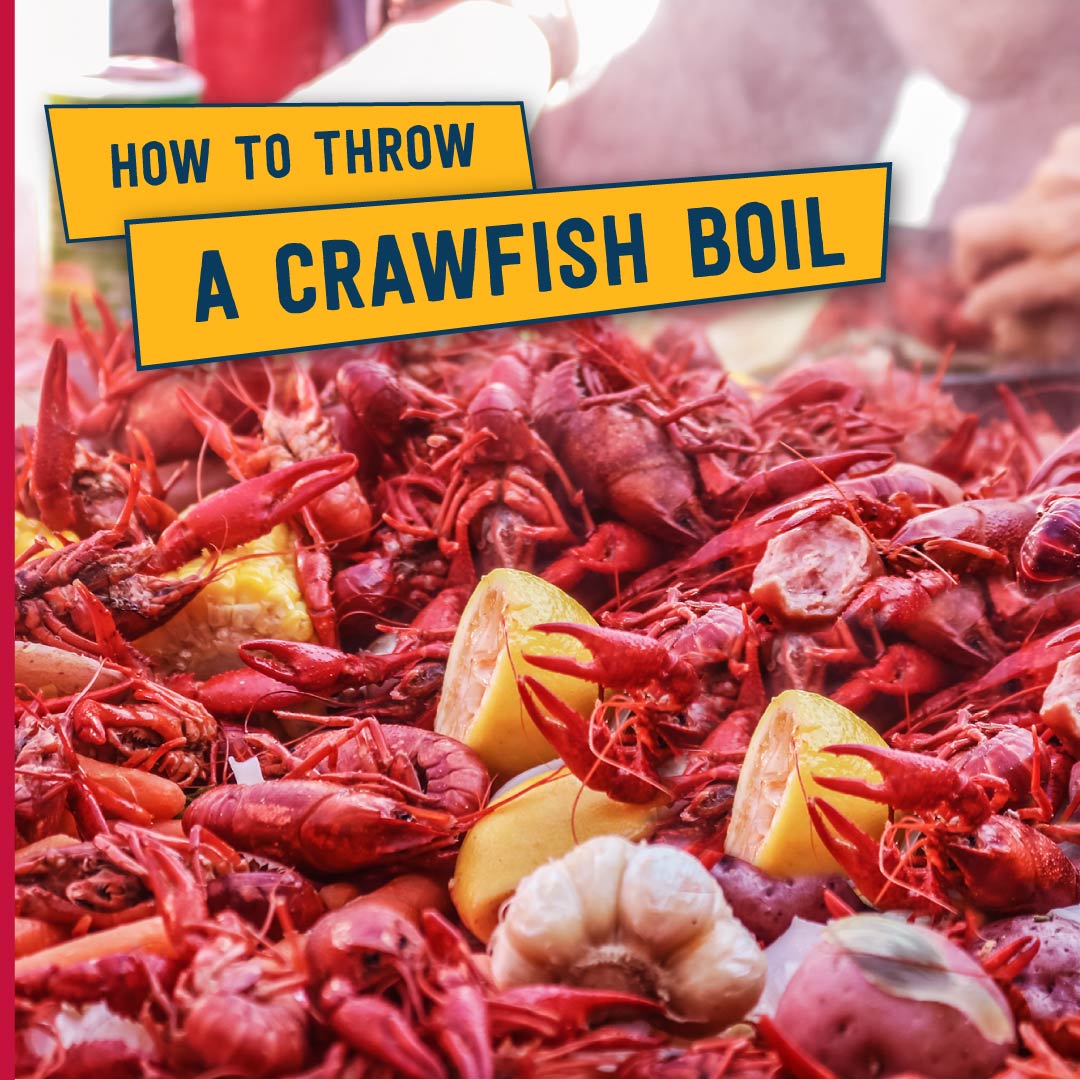 While he is boiling up as much as 200 lbs. of crawfish per batch at Deanie’s, he’s been known to throw a pretty awesome crawfish boil at home, so we asked him to tell us his secrets.

How to Purge the Crawfish

Crawfish are raised up in muddy bayous, streams and fields, so rinsing the crawfish well with a hose will help ensure you have clean crawfish meat and little else. At large crawfish operations like Deanie’s Seafood Market we use a little crawfish conveyor with a sprayer overhead. (Picture a carwash.)

At home, you can just put the crawfish in an ice chest, fill it with water out of the faucet or hose and let it sit 15-20 minutes, and by then they’re clean. Tip: “Using salt to purge the crawfish is an old wives’ tale. If you use salt you will just make them salty,” Graff said.

What Will You Need for Your Boil?

Besides the crawfish itself, you’ll need something to rinse the crawfish in such as an ice chest or plastic bin; a large pot (or turkey fryer) with propane burner; and a metal insert for the pot or a net to fish the crawfish out of the water once they’re cooked. You’ll want between 2 and 5 lbs. of crawfish per person, as a rule, although some Louisianans, like Graff, can eat 10 lbs. without batting an eye. The other essentials are water, boil seasoning, any extras such as lemon, garlic, potatoes and sausage, and a table covered with newspapers. Oh, and paper towels, lots of paper towels. And beer, lots of beer.

How to Prepare a Crawfish Boil Pot?

Usually, depending on the pot, you will add about 10 gallons of water and add the boil seasoning. Deanie’s has its own secret signature seasoning mix that comes in a 4 lb. bag, or you can pick up a jar of seasoning at a grocery store. Liquid seasoning is optional, but you have to have dry seasoning to pull off a tasty crawfish boil, Graff said. You’ll need one bag/jar of seasoning per sack of crawfish (approx. 35-40 lbs. of crawfish).

Light the burner, and once the water comes to a boil, add your garlic and potatoes. These should cook about 10-15 minutes so they are ready when the crawfish is done.

When do the crawfish and extras get added?

Now that your garlic and potatoes are started and your water is flavorful, it’s time to add your crawfish, plus items like lemon, onion, celery and oranges, and stir. When the water starts boiling around the edges again, stir it again.

The water will lose its boil when stirred, so once it boils again, about 2-3 minutes, it’s time to cool down your crawfish by either adding ice to the pot or hosing the bottom of the pot with cold water. This will keep your crawfish from overcooking and getting mushy. At that point, add corn, sausage, mushrooms if you like, brussels sprouts, you name it. Tip: Graff recommends sausage and hot dogs both.

Then let the crawfish sit for half an hour. Not 20 minutes, but a whole half hour. “I’ve cooked a million pounds of crawfish,” Graff said. “At 20 minutes the flavor just starts to sink in – it’s that last 10 minutes that makes them good.” Extra tip: Boiled crabs have to sit an hour.

What else can you throw in the pot?

You can toss most any vegetable and the occasional fruit into your boil. Graff says he’s seen everything from brussells sprouts and cauliflower to broccoli and cabbage – even a can of pineapple (punctured) so you can open it up after and eat the pineapple.

His oddest concoction? An old girlfriend’s dad wanted to see how crawfish would turn out if he boiled it in a keg of beer. (Not half bad.)

When is the best time for crawfish?

April is prime season for Louisiana crawfish. As a matter of fact, in 2015, Deanie’s got the state to recognize the month of April as Louisiana Crawfish Awareness Month!

Graff agrees, “The crawfish are good right now, good size, good flavor. It’s the prime time to get crawfish. With the water high, the crawfish are growing big and the meat is tender.” The season lasts through late May or early June, and boiled crawfish and a wide selection of Louisiana seafood is always available at {{cta(‘df2f375a-4ba0-4991-b623-af8b44ca6590’)}}, so it’s time to get you some now.  {{cta(‘80967c5d-b1cd-47ff-acc7-5c6bd6cf8c58’)}} or order Louisiana crawfish and crawfish boil fixings at our online market to prepare your own! We offer a variety of fresh and prepared seafood items, including seafood gumbo, boiled seafood, crawfish étouffée, stuffed crab and stuffed Louisiana shrimp.