Deanie’s Seafood values the traditions that started in Bucktown more than 50 years ago and carries them through all of Deanie’s Seafood restaurants to this day. And nothing says classic Deanie’s quite like our Giant Fried Seafood Platter. According to Gayot, “Seafood is found all over New Orleans, but one place is synonymous with classic Southern fried seafood, and that’s Deanie’s.”

The Giant Fried Seafood Platter has been around since soon after Frank and Barbara Chifici purchased the original restaurant and seafood market in 1982. Back then, it was called the Captain’s Platter.  We’ll let you in on the secret to perfectly fried seafood.

Giant Seafood Platter Offers ‘A Little Bit of Everything’ 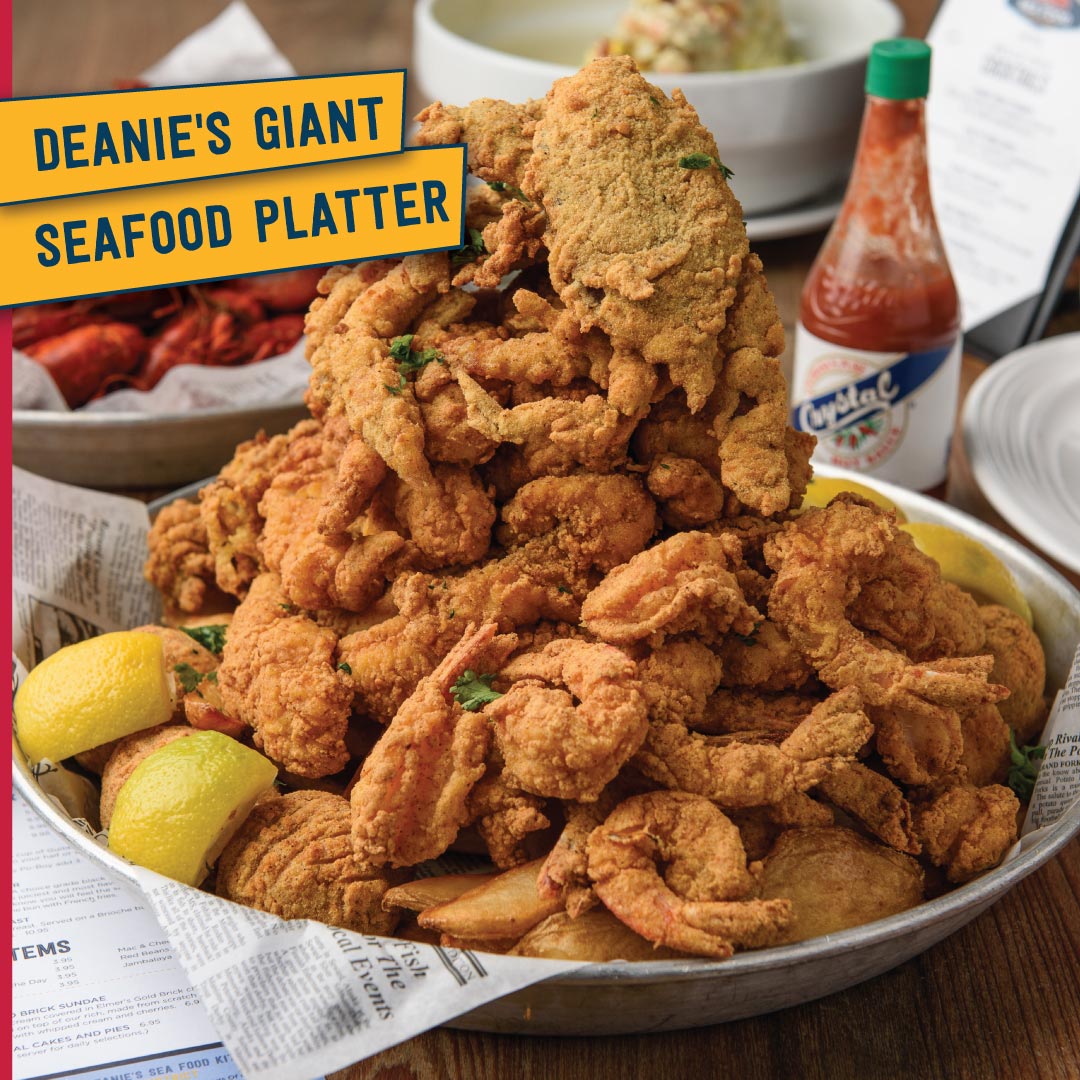 erything including farm-raised Mississippi catfish and Louisiana oysters, shrimp, soft shell crab and crawfish balls in an amount that encourages sharing. Our Giant Platter serves two to three people, and the half platter serves one to two.

“It is just a concept that my parents came up with so that the restaurant would have a family atmosphere, where a family could come in and eat on that giant seafood platter and enjoy their entire meal with a little bit of everything,” Chandra Chifici said during a recent interview on The Dine, Wine & Spirits Show with Tim McNally on WGSO. “It’s a staple, we are known for it. It is what Deanie’s was built on,” she said.

Deanie’s was ranked the No.1 Best Place for a Seafood Platter in New Orleans by Foursquare. Indeed, food critic Ian McNulty described the Giant Platter in a recent article about the opening of Deanie’s Sea Food Kitchen, a contemporary outpost of Deanie’s Seafood Restaurant in Uptown New Orleans. “The restaurant’s ‘giant’ and even ‘half’ seafood platters are stacked with enough shrimp, oysters, catfish, soft shell crabs and crawfish boulettes to feed a family,” McNulty said.

Frying food in hot grease may not be the healthiest preparation, but it is among the most popular methods restaurants use when making seafood. According to a recent Keynote Seafood Report, 33 percent of restaurants that offer seafood entrées serve fried ones. (However, all of Deanie’s fried entrées can be ordered broiled as well.)

The Secret to Perfectly Fried Seafood

The secret to perfectly fried fish is the seafood batter and maintaining a stable temperature of between 335 and 360 degrees when frying. At Deanie’s, the seafood is dipped in a mixture of buttermilk with seasonings, including granulated garlic (garlic powder), salt, pepper and cayenne. It is then dredged in corn flour and fried in soybean oil.

“What’s difficult about cooking fried seafood at home is maintaining a constant temperature,” Deanie’s Seafood Chef and General Manager Darren Chifici said. “So if you are trying to do it at home, you have to use a thermometer. When you drop the fish in, which will lower the temperature of the oil, you’ll want to watch it and possibly crank it back up so you get it back quickly to the stable temperature. If you don’t, that’s when it starts to absorb the oil and you get greasy seafood.

“Frying is about timing. If it starts to turn golden brown in about 45 seconds, your oil is to temp and it will be perfectly fried,” Darren Chifici added.