Deanie’s Seafood Restaurants is grateful to its loyal customers for continuing our legacy of accolades representing Deanie’s commitment for delivering locally sourced Wild Louisiana seafood with our signature housemade recipes. This year, Deanie’s has earned top seafood restaurant awards from Gambit’s “Best of New Orleans,” Where Y’at Magazine’s “Best of the Big Easy,” and New Orleans Magazine’s “Tops of the Town” awards.

BEST OF THE BIG EASY AWARDS 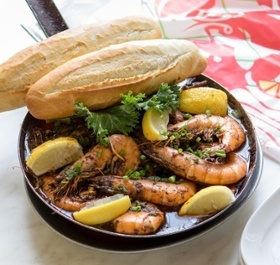 accolades to many talented local restaurants, attractions, artists and other important locales in the Big Easy. Deanie’s received awards for Best Seafood Restaurant in New Orleans as well as coming in second for Best Restaurant for Boiled Seafood. Where Y’at Magazine praised Deanie’s saying, “Since Deanie’s has been recognized as a New Orleans favorite since 1961, you know their seafood is to die for, especially their seafood platter.” <<< pull out quote too >>>

Gambit’s annual “Best of New Orleans” readers poll offers awards in categories including food, entertainment, news, and many more. More than 17,000 ballets were given out to local readers to determine what really is the Best of New Orleans. Deanie’s Seafood Restaurant was voted in the top 3 among Best Seafood Restaurants and Best Places for Boiled Seafood. This marks the 18th-consecutive year that Deanie’s has been honored in the “Best of New Orleans” readers poll. Previous years have extended to include other categories such as Best Oyster Po-Boy and Best BBQ Shrimp.

Deanie’s has built up a long list of achievements over the years as a favorite of locals and visitors dedicated to service, quality and authenticity. Deanie’s has received a Certificate of Excellence from TripAdvisor for the past seven years straight as well as being a part of the TripAdvisor “Hall of Fame.” In 2017, Deanie’s Charbroiled Oysters and New Orleans Barbeque Shrimp were featured on Zagat’s BBQ National tour, and the restaurant itself was included on the review site’s “New Orleans Best Seafood Restaurant” list. A local seafood expert and advocate of consuming domestic seafood in support of the local fishing industry, Deanie’s blog is ranked in Feedspot’s Top “Best Seafood Blogs for Seafood Lovers” on the planet.