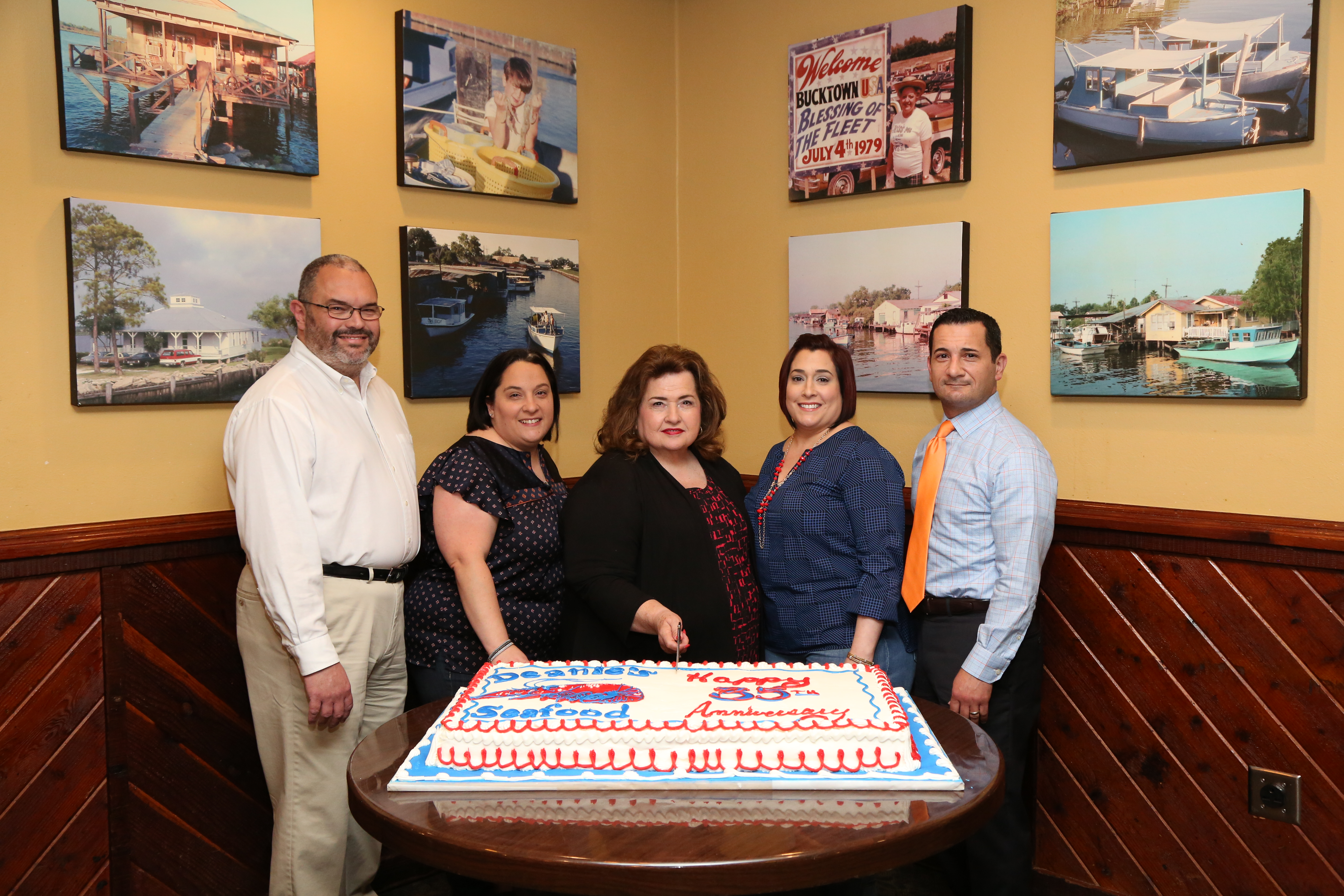 ublications, including Gambit Weekly, Where Y’at Magazine and New Orleans Magazine, and is known for serving huge portions of the best boiled, broiled and fried Louisiana seafood in a fun and casual atmosphere.

“We’re proud to be a part of the community that has grown up around us, and to deliver an authentic taste of the flavors and fresh seafood from our region,” Mrs. Barbara said. “We strive to treat each customer as a guest in our home and to deliver the hospitality and quality for which we are known. We hope to continue to hold a special place in our patrons’ lives as the place they go to celebrate special occasions with family and friends.”

In 1982 when Mrs. Barbara and her late husband Frank became the owners and operators of Deanie’s Seafood Restaurant & Market in Bucktown it was a small market with a tiny restaurant.

Deanie’s in Bucktown, located at 1713 Lake Ave. in Metairie, is one of a handful of restaurants in the GNO with a seafood market adjacent to the restaurant, offering customers the opportunity to purchase the same fresh, locally sourced seafood Deanie’s uses to create their authentic New Orleans cuisine. It was the first seafood market in Bucktown when it was opened by original owners John and Alma (Deanie) Livacari. The market offered take-out including boiled seafood and prepared items such as stuffed crab, stuffed peppers and some fried seafood. The couple sold the business in the 1970s to a group of partners.

‘YOU’RE OUT OF YOUR MIND’

Before they bought Deanie’s, Frank and Mrs. Barbara owned Chifici’s, an Italian restaurant on Magazine Street in New Orleans Central Business District, which they opened in 1977. Frank often came up with ideas that the couple would have to figure out later, such as the time he bought a limousine and they had to come up with a plan to use it (which included driving their seven kids to school in a limo).

A regular customer of Chifici’s convinced Frank he should open a restaurant in Metairie. He gave the couple $10,000 to start out with as the first investor of Gromboli’s, “a little bitty place” on Veterans Boulevard.

Frank was able to open Gromboli’s in 1980 by calling in favors from contractors, suppliers and the like, who would trade their services for stock in the business. His efforts to galvanize resources so impressed the bank, Mrs. Barbara said, that the bankers called him to let him know that Deanie’s would be available and asked if he’d like to do the same thing on a larger scale. At the time, the couple had seven children who ranged in age from 7 to 16 years old.

Frank, who was a devout Catholic, started a novena and prayed about coming up with the money to buy Deanie’s. Mrs. Barbara said he would go to his local church to pray on it and sometimes she would go with him: “And he’s praying he gets it,” she said, “and I’m saying ‘Lord, please, no.’”

We know how that turned out.

CHIFICI’S TAKE OVER DEANIE’S IN BUCKTOWN

Frank and Mrs. Barbara and a few investors purchased Deanie’s Seafood Restaurant & Seafood Market in 1982. The market offered fresh local seafood and take-out, including boiled and prepared items such as stuffed crab, stuffed peppers and some fried seafood, and a small restaurant was added around 1980.

After they purchased Deanie’s, the couple soon expanded the restaurant to about double its original size and introduced the Captain’s Platter, known today as the “Giant Seafood Platter,” a bounty of everything including farm-raised Mississippi catfish and Louisiana oysters, shrimp, soft shell crab and crawfish balls. They decided to turn Gromboli’s into Deanie’s Carry-Out, where they sold po boys, the Captain’s Platter and Mates Platter. The take-out business soon outgrew the space and the Chificis eventually sold both their other restaurants to focus on Deanie’s.

After Frank passed away in 1985 Mrs. Barbara brought the Chifici children in to help manage the business.

“They grew up there,” Mrs. Barbara said of her children. “It didn’t matter what they were doing, when they turned 16, they went on the payroll and they had to start working. We both wanted them to know where the clothes they had on their backs came from, the food on the table. It’s kind of like the old Italian way—that things don’t come easy, you’ve got to work for them.”

In 2001, she purchased a second Deanie’s location, one of the busiest restaurants in the French Quarter, which opened at the corner of Iberville and Dauphine Streets. Located in the former D.H. Holmes Department Store Annex, the renovation of the site helped to revitalize this area of the Quarter. Shopdeanies.com was launched in 2011 offering fresh and boiled seafood and prepared items overnight to anywhere in the Continental United States. Then, in June 2018, Deanie’s third restaurant, Deanie’s Sea Food Kitchen, opened on Magazine Street in Uptown New Orleans at the intersection of the Garden District and Irish Channel.

Deanie’s Seafood is synonymous with fresh local seafood and has a starring role in Bucktown’s history. Deanie’s Seafood is one of a handful of restaurants that has a seafood market adjacent to the restaurant, offering customers the opportunity to purchase the same fresh, locally sourced seafood Deanie’s uses to create their authentic New Orleans cuisine.

Deanie’s authentic New Orleans cuisine has been featured on various programs on The Travel Channel and Food Network. Deanie’s recipes also have been showcased in Gourmet magazine and in cookbooks such as Chef John Folse’s “Hooks, Lies and Alibis” and “New Orleans’ Best Seafood Restaurants” by Ann Benoit.